Oh, for the love of art 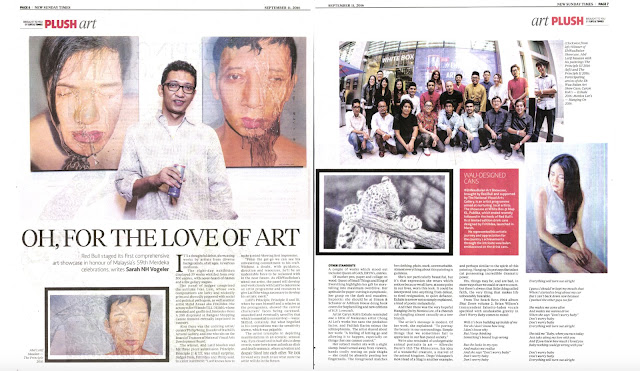 IT’S a thoughtful debut, showcasing works by artists from diverse backgrounds, of all ages, in various mediums.

The eight-day exhibition displayed 59 works whittled from over 300 entries, with never-heard-of-names and a few gallery staples.

The panel of judges comprised the sublime Ivan Lam, whose own compositions are larky and wickedly grim and shrewdly peppered with social and political pathogens, as well as street artist Mohd Anuar aka Fritilldea (the acronym for FRIends TILL DEAth), whose streaked and graffit-ied Mercedes-Benz A 200 displayed at Bangsar Shopping Centre remains eternally imprinted in memory.
Also there was the untiring artist/ curator Philip Wong, founder of Starhill’s Artseni Gallery, and one who sits on the Board of Trustees of National Visual Arts Development Board.

“From the get-go we can see his unwavering commitment to his craft. Without a doubt, with guidance, direction and resources, he’ll be an undeniable force to be reckoned with in the near future. As #EhWauBulan’s stand-out artist, the panel will develop and work closely with Latif to determine an artist programme and resources to give Latif the wings necessary to develop his artistic merit.”
Latif’s Principle, Principle II and III, where he uses himself and a relative as the protagonists, showed the central characters’ faces being caressed, assaulted and eventually saved by that which is essential to our survival — water. Skilled, certainly. But what beguiled in his compositions was the sensitivity shown, which was palpable.

The artist triumphs in depicting manifestations in an ecstatic, sensual way. Eyes closed and in half slits in deep reverie, water here is seen as both an elixir and death sentence, where salvation and despair bleed into each other. We look forward very much to see what more the artist will do in the future.

OTHER STANDOUTS
A couple of works which stood out included Queen of Goth, ERYN’s, entries.
Of marker pen, paper and collage on wood, Queen of Small Things and King of Everything highlights her gift for story-telling into maximum overdrive. Her aptitude for paper-cutting is symphonic, her grasp on the dark and macabre, hypnotic; she should be at Simon & Schuster or Arkham House doing book covers for Stephen King and new editions of H.P. Lovecraft.

Artist Caryn Koh’s Exhale reminded one a little of Malaysian artist Chong Ai Lei’s works but sans the peekaboo factor, and Fadilah Karim minus the schizophrenia. The artist shared about her work: “A feeling of letting go and allowing it to happen, especially on things that one cannot control.”
Her subject matter sits with a slight slump, head turned away from viewers, hands coolly resting on pale thighs — she could be absently peeling her fingernails. The foreground matches her clothing, plain, stark, unremarkable. Almost everything about this painting is guileless.

She’s not particularly beautiful, but it’s that expression she wears which entices because we all have, at some point in our lives, worn this look. It could be interpreted into anything from defeat, to tired resignation, to quiet defiance. Exhale is sorrow not so simply explained, a kind of poetic melancholy.
And then there was the very hopeful Hanging On by Monica Lee, of a cheetah cub dangling almost casually on a tree branch.

The artist’s message is modest. Of her work, she explained: “To portray the beauty in our surroundings. Simple things that we sometimes fail to appreciate in our fast-paced society.”
We’re also reminded of unforgettable animal portraits in art — Albrecht Durer’s 1515 The Rhinoceros, his idea of a wonderful creature, a marvel of the animal kingdom. Diego Velazquez’s 1634 Head of a Stag is another example; and perhaps similar to the spirit of this painting, Hanging On portrays the infant cat possessing incredible dramatic power.

Yes, things may be, and are bad, in more ways than we could or care to count, but there’s always that little thing called faith, the very thing that makes life unbearably bearable.

She told me “Baby, when you race today
Just take along my love with you
And if you knew how much I loved you
Baby nothing could go wrong with you” 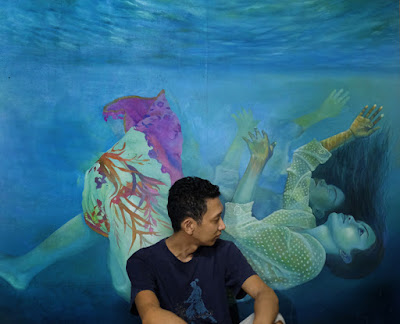