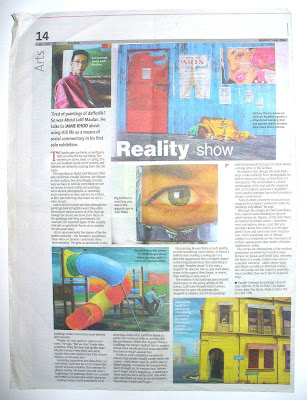 Tired of paintings of daffodils? So was Abdul Latif Maulan. He talks to JAMIE KHOO about using still life as a means of social commentary in his first solo exhibition.


THE landscapes are bleak, or perhaps a little too cheerful for our liking. The women are alone, tired, or crying. The men are huddled round street corners, and children are distinctly missing from the canvases.

The paintings in Abdul Latif Maulan’s first solo exhibition, Parallel Universe, are vibrant in their realism, but disturbingly so in the way we have to rethink everything we see on canvas. In stark reality, the paintings seem almost photographic in capturing acute moments in time and we are tricked, at first, into believing that what we see is what we get.

Latif is quick to point out that although the paintings look straightforward, they often encompass various points of view that can change the stories we draw from them. In the paintings One Way and Rejected, for example, the repeated figure of the scantily-clad girl-as-prostitute forces us to consider her personal story.

He is concerned with the stories of the forgotten minority – the homeless, prostitutes, those who are abused – and treats them with empathy. The girls-as-prostitutes in the paintings evoke a sort of personal interest and curiosity.

“People are very quick to reject prostitutes,” he says. “But we don’t know their problems. Why did they end up like that? Maybe it wasn’t even their own wish; maybe they were pushed into it by circumstances, or someone else.”

Garnering inspiration and ideas from current issues, Latif uses his art to remind the viewer of social maladies that continue to plague society. He doesn’t just tell what’s happening; his paintings pique our curiosity and entice us to question what’s going on.

Having trained under prominent local artist Raja Azhar Idris, Latif first learnt to perfect his technical skills in painting still life and flowers. When this stopped being a challenge, his mentor pushed him to explore themes that would prod his brain and make him look at what’s around him.

Works in Latif’s exhibition incorporate themes that people usually sweep under the carpet – child abuse, rape (in public places), illegal logging, corruption. By documenting them through art, he ensures that “people don’t forget what’s happening. A painting is there and you see it all the time; you don’t just read about an issue in the newspapers, then throw it aside and forget.”

His painting Beware hints at such apathy, or even something more sinister. It shows a solitary man reading a newspaper at a deserted playground. But a dropped slipper in the foregrounds hints that something is not right. Possible abuse? Is the man a suspect? Or does he, like us, just read about crime in the papers, then forget, or worse, does nothing to help stop it?

The realism of the paintings goes beyond social issues to the actual setting of the scenes. Latif arms himself with a camera wherever he goes. His photographs, snapped at random, furnish his paintings with backgrounds that give the local viewer a strong sense of the familiar.

He explains that though the main backdrop is taken directly from photographs, he adds or takes out things, or discolours certain aspects. The end product is a clever combination of the real and the imagined that, at first glance, presents a straightforward, explicit message, but which contains a deeper commentary.
“Lots of artists comment on social issues using abstract styles. I wanted to make my paintings very direct,” he says.

Although his images are bold and direct, they require some thinking to discern what’s going on. Figures, or the lack thereof, represent certain issues – homelessness, corruption, abuse, rape. But you wouldn’t know that unless you thought about them and used your own imagination. Latif’s particular use of vibrant colours is a comment on the cheeriness of surface appearances that masks a bleaker, unpleasant reality.

His works are reminiscent of the realism prominent in works by French writers Honoré de Balzac and Emile Zola, whereby the force of a seedy, hidden sub-culture – a parallel universe – takes centre stage and blinds us with an alternate reality – one we hardly see but which is probably more truthful than we’d like to acknowledge. 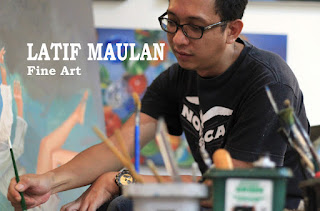 Latif Maulan - An artist on a voyage of self discovery  By Gerry Long B orn in 1974 in the state of Pahang, Malaysia, in the quiet village of Lebu, Latif's early childhood was spent with his family in their bamboo house near a small river. Those early years invoked in him a great love of nature, particularly the Jungle and river where he spent so many happy hours with his family and friends. It was with the help of two of his sisters that he initially commenced to draw, and not surprisingly his  first drawings reflected his love of the landscape that surrounded him. He started Primary school in 1981 studying at Skolah Menengah Kebangsaan, Lebu and then continued his education at Skolah Menengah Kebangsaan, Bentong.  Although initially in the Science stream, his keen interest in art soon prompted him to transfer to the Art stream. He finished high school in 1991, but due to financial constraints, had to forgo further studies at university level. Then followed a somewh 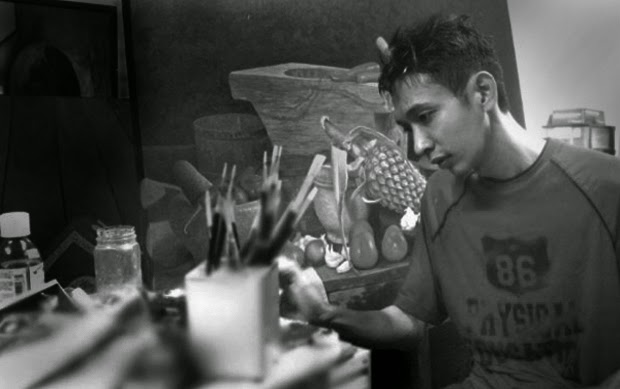 I am usually eager for that blessed moment when I can shut my studio door behind me and continue my mission creating my art.when shutting this door I am shutting out all day-to-day experiences and entering the spiritual world that I have the gift to express........