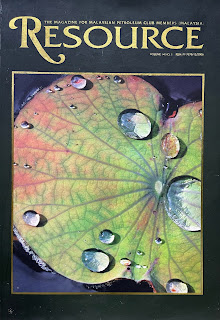 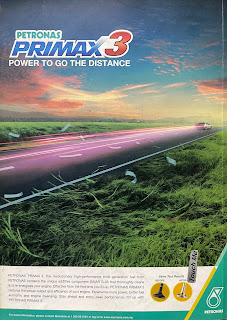 Abd Latif Maulan is a master of the dark, of forbonding lurking in the wings. The almost Hitchcock-esque sense of the imminent danger is written all over his seemingly innocuous pictures. A man reading the newspaper in a playground in BEWARE! seems ordinary enough but take a closer look. A child's slipper strewn
carelessly nearby. Now, we cannot be so sure as to the bona fides of this man. A paedophile, perhaps?

A women in the front of the bus, face contorted with misery. She is not alone .
A shadow lurks in the background. Does he mean her any harm or does it just so
happen that the bus is empty on that day? SILLHOUETTE JOURNEY recalls a real life incident in newspapers a little while back where a women was raped and killed
on bus in the early morning while going to work. 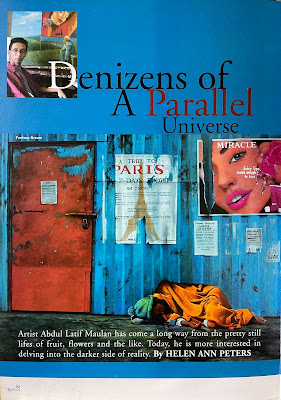 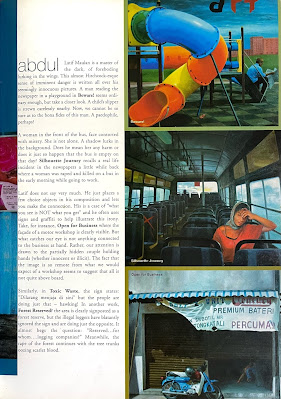 Latif does not say very much. he just places a few choice objects in his composition and lets you make the connection. His is a case of " what you see is NOT what you get" and he often uses sings and graffiti to help illustrate this irony. Take for instance , OPEN FOR BUSINESS where the facade of a motor workshop is clearly visible. But what catches our eye is not anythings connected to the business at hand. Rather our attention is drawn to the partially hidden couple holding hands ( whether innocent and illicit). The fact that the image is so remote from what we would expect of a workshop seems to suggest that all is not quite above board.

Similarly, in TOXID WASTE, the sign states, " DILARANG MENJAJA DI DISINI" but
the people are doing just that - hawking! IN another work, FOREST RESERVED?
the area is clearly signposted as a forest reserve, but the illegal loggers have blatantly ignored the sign and are doing just the opposite. It almnost begs the question, "Reserved...for whom ...logging companies? Meanwhile , the rape of the forest continues with the tree trunks oozing scarlet blood. 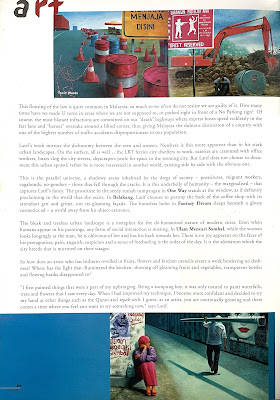 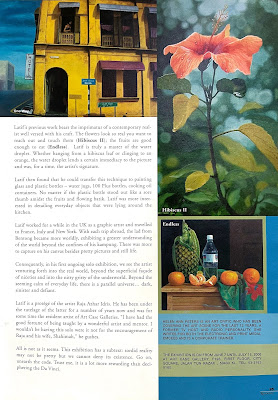 This flouting of the law is quite common in Malaysia so much so we often do not realize we are guilty of it. How many times have we made U turns in areas where we are not supposed to or parked right in front of a No Parking sign? Of course the most blatant infractions are commited on our "death" highways where express busses speed recklessly in the fast lane and " heroes" overtake around a blind corner, thus giving Malaysia the dubious distinction of a country with one of the highest number of traffic accidents disproportionate to our popolution.

Latif's work mirrors the dichotomy between the seen and the unseen. Nowhere is this more apparent than in his stark urban landscapes. On the surface, all is well... the LRT ferries city dwellers to work, eateries are crammed with office workers, buses clog the city streets, sky scrapers jostle for space in the teeming city. But Latif does not choose to document this urban sprawl; rather he is more interested in another world, existing side by side with the obvious one.

This is the parallel universe, a shadowy arena inhbited by the dregs of society - prostitues, migrant workers, vagabonds, no-gooders - those that fall through the cracks. It is this underbelly of humanity - the marginalised - that captures Latif's fancy. The prostitute in the seedy rumah tumpangan in ONE WAY stands at the window, as if defiantly prclaiming to the world that she exists. In BELAKANG, Latif chooses to portray the back of the coffee shop with its attendant grit and grime, not its gleaming facade. The homeless hobo (FANTASY DREAM) sleeps beneath a glossy cosmetics ad - a world away from his abject existence.

The bleak and treeless urban landscape is a metaphor for the dehumanised nature of modern cities. Even when human appear in his paintings, any form of social interation is missing. In ULAM MENCARI SAMBAL, while the women looks longingly at the man, he is oblivious of her and has his back towards her.There is no joy apparent on the faces of his pratoganists; pain, anguish, suspicion and a sense of foreboding is the order of the day. It is the alienation which the city breeds that is mirrored on their visages.

So how does an artist who has hitherto revelled in fruits, flowers and kitchen utensils a work bordering on darkness? Where has the light that illuminated the kitchen, showing off gleaming fruits and vegetables, transparent bottles and flowing batiks disappeared to?

" I first painted things that were part of my upbringing..... being a Kampong Boy,
it was only natural to paint waterfalls, trees and flowers that I saw everyday.....when I had improved my technique, I become more confident and decided to try my hand at other things such as the QURAN and TEPAK SIREH. I guess as an artists, you are continually growing and there comes a time where you feel you want to try something new, " says Latif.

Latif's previous work bears the imprimatur of a contemporary realist well-versed with his craft. The flowers look so real you want to reach out and touch them; the fruits are good enough to eat. Latif is truly a master of the water droplet. Whether hanging from a hibiscus leaf or clinging to an orange, the water droplet lends a certain immediacy to the picture and was , for a time, the artists's signature.

Latif then found that he could transfer this technique to painting glass and plastic bottles - water jugs, 100 Plus Bottles, cooking oil containers. No matter if the plastic bottle stood out like a sore thumb amids the fruits nd flowing batiks. Latif was more interested in detailing everyday objects that were lying around the kitchen. Travelled to UK, France, Italy, Australia and New York. With each trip abroad, the lad from Bentong became more worldly, exhibiting a greater understanding of the world beyond the confines of his Kampong. There was more to capture on his canvas besides pretty pictures and still life.

Consequently, in his first solo exhibition, we see the artist venturing forth into the real world, beyond the seeming calm of everyday life , there is a parallel universe...dark, sinister nd defiant.

All is not as it seems. This exhibition has a subtext: sordid reality may not be pretty but we cannot deny its existence. Go on, unearth the code. Trust me, it is a lot more rewarding than deciphering the Da Vinci.

( Helen Ann Peters is an art critic who has been covering the art scene for the last 12 years. A former tv host and radio personlity, she writes for both the electronic and print media, emcees and is a corporate trainer. )
Labels: Media_Articles