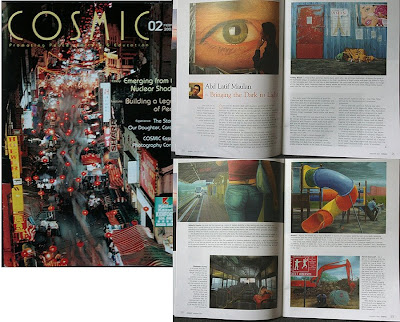 One word to describe Abd Latif Maulan’s paintings in his solo exhibition - provocative. But unlike trendy news and loud fashions, the artworks are quiet and thoughtfully provocative, appearing as though they are ‘what we see is what we get,’ drawing us in before hitting us in a way that sticks the messages home to our memory.

It might shock some to learn that it was the young but mature artist’s first solo show and he had never painted anything of the like in the past. It does not help to hear that this contemporary realist has always painted beautiful, almost photo-realistic pictures of flowers, waterfalls, plants and everyday things - his artistic signature being his dew drops on petals or leaves.

Like a photojournalist, he dispassionately records subjects (including contemporary life) accurately, minutely without fictitious adornment or imaginative idealisation. He is a friend of the ordinary, humble people, familiar with their appearances, problems and customs. Currently, Maulan chooses to project the hitherto-ignored (and often swept under the carpet) aspects of contemporary life and society with its mental attitudes, physical settings and material conditions.
His works reject the artificiality of both the Classicism and Romanticism of the academies and show the capability of photography in mechanically reproducing visual appearances with extreme accuracy. Some artists and writers who have worked in the same tradition were Jan van Eyck, Jan Vermeer, Diego Velazquez, Daniel Defoe and Henry Fielding.

His ‘Metamorphosis’ was largely due to his desire for change and extensive travels to the United States of America and Europe to meet many local artists and visit art galleries. Equally important, if not more, is the inspiration and encouragement from his mentor Raja Azhar Idris - owner of Art Case Galleries Sdn. Bhd. - who has taken him under his tutelage since 1991.
Maulan was forced to break through his complacency and transcend his comfort zone to think more deeply about the pressing issues confronting our daily lives at present - in other words, to grow further as an artist. “A discerning artist should aspire to change,” says Raja Azhar, famous for his ‘impressionistic movement’ glassworks.

The 32 year-old Maulan from Pahang was also greatly inspired by the masterful ideas, almost iconic and unique imagery of Jeffrey Smart. This Australian artist’s stark portrayals of contemporary life, both realistic and absurd, are highly acclaimed and famous. In a similar vein, Maulan uses art to highlight ignored and easily forgotten issues such as illegal logging, child abuse, rape and corruption coupled with social problems like homelessness, prostitution, loneliness, poverty and pollution, common issues which people could not bear to read for long.
Visiting artists of different countries has shown him the uniqueness of different cultures, religious backgrounds, customs and beliefs. “Art is drawn from these sources,” says Maulan, also dubbed as a ‘Master of the dark,’ “but when expressed sincerely from the heart, mind and soul of the artist, it becomes universal. 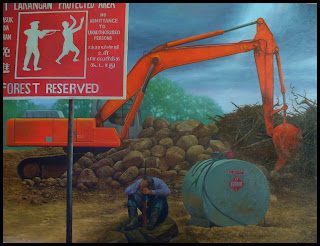 Forest Reserved ? - At a glance, the painting looks like a common photograph of a cleared site near a forest. The hot reds of the excavator, the warning signboard and the ‘No Smoking’ signboard on the petrol tank order us to stay away from the area. But from what? From discovering their illegal secrets? Or is the area dangerous because criminals are illegally logging in a forest reserve? Notice the title ‘Forest Reserved ?’ We now think: “For whom? For the influential businessmen or powerful politicians?” If the answer is a yes to either of them, then the danger is real indeed.

Also doing the same is the armed guard guarding the site who appears to be tired and sleepy. Or drunk? Which makes him all the more dangerous. 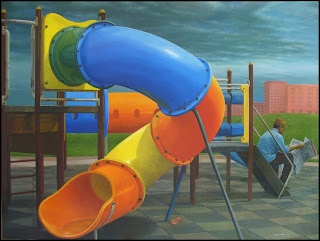 Title: Beware
Size: 36 Inch x 48 Inch
Meium: Oil On Canvas
Collection of Bank Negara Malaysia
Beware - against the sinister sky, a man is absorbed in reading the newspaper patiently, even contentedly, seemingly unconcerned with the empty playground or the threatening clouds. His action and calm is totally incongruously with the impending storm - makes us scratch our heads.. It was as though he lives there, in the playground itself

The unreal, hot, intense colours stand out so strongly against their surrounding, as if trying to scream out a warning soundlessly. A speck of bright red - turns out to be a child’s slipper - lying on the grey floor, forgotten?, lost?, abandoned? but certainly crying out for attention. Where is the child? What has happened to him or her? Is the man linked to the child in any way? 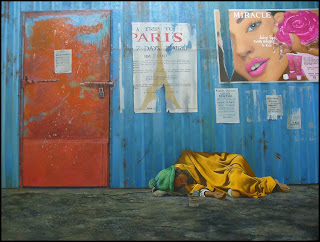 
Fantasy Dream - A trip to Paris, Juicy lips, express loans, pawn bills...are all things materialistic, all beyond the grasp of the barefooted beggar or vagabond lying asleep on the floor. His blanket of bright orange and green cap, bathed in light, set him noticeably apart from the dull blue or grey background. The much-used red door, locked tight, appears as though all the materialistic goods, hedonistic pleasure, beauty, wealth and leisure would be found within, though tightly locked away from the man who could only afford to dream and fantasize. 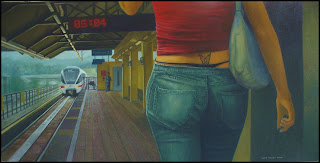 Butterfly Dreams is a great title that conjures up a vision of Madam Butterfly, a play dealing with love, self-deceit and tragedy with a young fragile girl as the heroine. It invokes tender secrets (illegal and immoral?) and eroticism, the tenderness appealing to our protective instincts. Despite its symbolism and high importance, the butterfly tattoo (probably chosen by the woman to reflect her nature) occupies only a minute but obvious area of the picture.
The shapely woman seems to be on her way home after work, the time being already 05:04 p.m., approaching twilight, a time when crimes such as rape, murder, robbery or molestation is more likely to happen. Her red dress echoes the red warning band by the sides of the coming train.

The composition of the scene is painted from the viewpoint of a common pedestrian walking up a flight of steps to the platform. As we look up naturally and as we are directly behind the woman, we are unable to help from looking at the fluttering butterfly on the exposed waistline,. Is she trying to do more than invite our attention? It may be for fun, but the tattoo may send out wrong signals to unwanted viewers. Who’s fault is it should something undesirable happen to her? 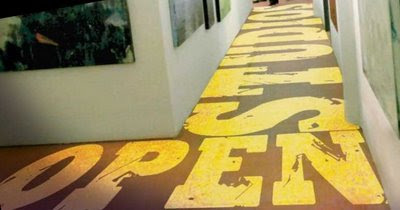